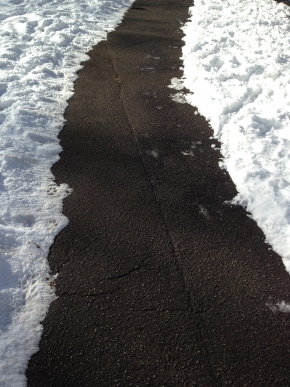 “Despite the sunshine…” is a little phrase buried inside today’s weather alert from the Weather Channel. Outside I’m in my shirt sleeves shoveling snow to create a path between my house and my studio. It is about 150 feet. I had plenty of other stuff to do today. I woke before dawn with my to do list on the table next to my bed. I’ve tried to get things done but I just kept returning to shoveling snow. I convinced myself that this was really important, that it had to be done now before anything else because I knew it was all going to freeze again tonight.

All day its been like this – shoveling and working, working and shoveling. And I do think my work is important – not so much the shoveling except for the fact that I’ve been outside breathing brilliant air, seeing the world as if I just showed up, and waving to neighbors that I haven’t seen in months. What’s up with this?

I suppose I can blame “cabin fever”. Wikipedia has a lovely definition of it having to do with feeling closed in for an extended period of time – like living between home, work, and a variety of third spaces like coffee shops and the winter farmers’ market. But I know it’s more than this. I know that spring is closing in despite the bitter cold coming tonight and next week.

Who doesn’t have a conflicted relationship with the weather? Who can’t find inspiration in the hesitated moment outside when we catch a glimpse of a bird or a blue shadow out of the corner of our eye? I’m beginning to think that there should be places to simply pull out of traffic, to pause, to stop, to think, to catch our breaths. Maybe we should build human perches around the city that allow us to see the “forest through the trees”?

My 12 year old daughter spent the day inside with friends exploring issues related to racism. On her way home she called me to say, “We’re going sledding.” I thought to say something like, “Get out of my head!” but an original thought that connects itself to timelessness should be celebrated on its own terms. I said something wholly unoriginal in the vein of, “Well, just keep warm.” or “Remember to stay hydrated.”

So despite the sunshine and the work that desperately needs to be done and the issues that need facing and the problems to be solved maybe a little break is in order? It is Saturday after all.