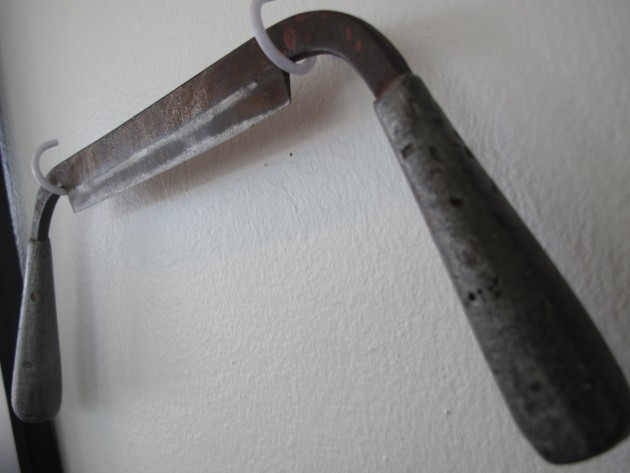 On May 8, 2014, the Tools exhibit took place at the Big Car Service Center. This piece is by Philip Campbell.

He played the harmonica,

made sweet tea you could stand a spoon in,

had a giant mulberry tree that canopied his front yard

and kept the gasoline for his lawnmower in an 16oz coke bottle.

Which, as a child, I drank and had to have my stomach pumped.

They built a 10 foot chain link fence equipped with barbed wire, around his small property because he refused to sell to them.

He attended church in the Indy Fringe building off Mass Ave.

He died in 1987, one month after his 100th birthday with full head of white hair.

I was given a box of his tools.

I held on to the antiques for their potential resale value.

One day I decide to carve a boat. A boat on fire.

Nothing would remove the wood fast enough.

Then I remembered his draw knife.

It was as tough as he was.

Last year I made 100 Burning Boats.