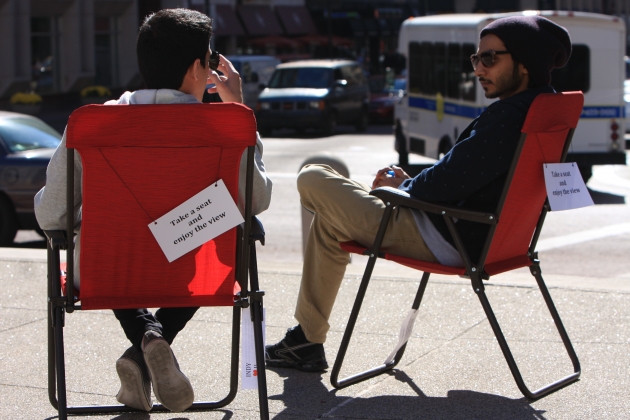 It is snowing. On the ground it turns out to be more ice and water than snowflakes. This seems early for Indianapolis. Halloween is a week away and only the maple leaves are earnestly turning yellow. Autumn still has a lot to do before winter takes over.

It’s impossible not to conjure up little weather reports like this one because Rebecca and I will be installing and remixing the Chairs on Monument Circle next Monday. We’ve been discussing a Chair Redux since the first chairs appeared a month ago today. The 24th of September was gorgeous downtown – no clouds, all sun, warm, relaxed, different from today.

This is something that all artists, all people, have to deal with – changing variables. It is always tempting to get your mitts all over the possible alterations that a work of art might endure. But when working in public restraint becomes a powerful core value of design. It doesn’t take much to turn sincere intent into yuck. So we are not changing the chairs. We’re not changing color, size, shape, dimensions, number, or location. The only change will be the date.

This, by itself, is enough to alter how the chairs work, or don’t work. On 9/24/2013 it was 70 degrees downtown. Will a 58 degree day (the projected high for Monday) intrinsically change the role the chairs play on the Circle? I know that chance operations are at work here but I’m not sure it really matters. I mean we could go on about designing for the unexpected but it would be beside the point. The Chairs, as part of TOI’s project INDY LOVES YOU, are focused on hospitality – Hoosier-, or as I said before, IndyStyle-Hospitality. Why wouldn’t Indy want to be known around the world for what it’s already doing – being gracious and welcoming. This is the meaning behind the chairs.

I thought of this passage on the 24th because I had just spent a remarkable afternoon watching people be themselves out in public. The chairs set that stage. The people did all the beautiful stuff.

-Oh, I just figured out that there are two things we are changing about the chairs. Besides the date being altered we’re letting you know before we put them up. We’ll find out together if this makes a difference?