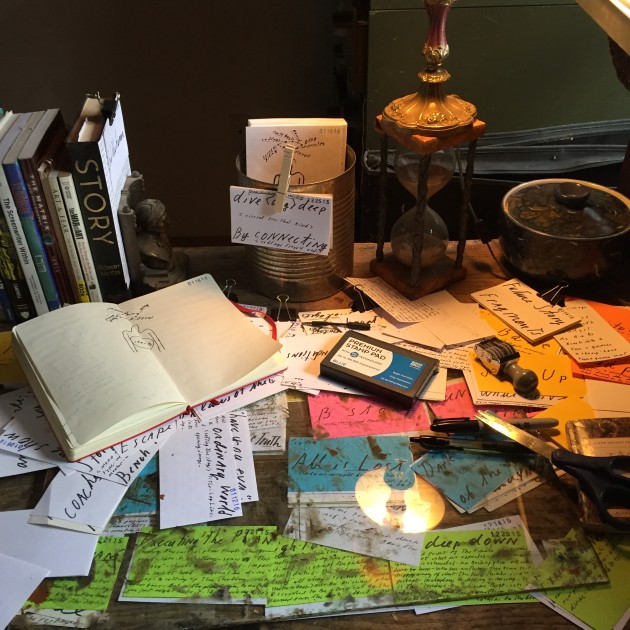 In the studio at three a.m. the work begins to make sense to me. I start writing sentences that reflect what’s going on with the paint, oil pastels, the graphite, and the new forms. It’s all of one thing – the discipline, the refusal to quit, the difficult themes, and ambiguous subjects that keep me up all night. I try to get it right. And right is relative. For me? Right is whatever it takes to shift me forward in my seat. Or right is the sound of stuff, like an owl calling to an owl in one of my neighbor’s pine trees. This is what I hear now. This causes me to turn away from the work of my hands, make my way to the door, and open it.

Most of the time that’s it – night-silence like a letter kept in a drawer. But tonight, early March in Indiana, with no leaves on any of the backyard trees, there isn’t anything to block the sound of the trucks speeding through the intersection of highways tied in a concrete knot downtown. This is miles away but I can easily see, in my mind’s eye, the green, orange, and blue cabin lights washing over the faces of truck drivers. I think, “That’s it. Show’s over.”

I turn to head back in. I’m in a hurry not to lose my place in the world of work. I’m not up in the middle of the night for nothing. However, I’m stopped again. Small crackling noises are coming up from the ground all around me. My studio sits in a tiny wood lot. I can count and name the trees outside my door – Maple, Red Bud, Hackberry, Catalpa, Mulberry, and Elm. In the fall, everything I rake up in the front yard gets scattered back here.

The crackling sounds are coming from the thin carpet of dry leaves at my feet. For years I mistakenly thought this sound, at this time of year, could only be the shoots of little plants and wild flowers pushing up from the ground and shifting the leaves around. I held onto this belief because I loved the idea of it. Turns out it’s earthworms making dirt. I figured this out a few early springs ago when I took my daughter outside to show her the sounds. Using a flashlight we tracked a single crackling noise to its source and found a worm beneath a dry leaf. We repeated this procedure numerous times and found worms going about all over the place.

My daughter was elated. But I felt as if I had lost a friend in my mistaken logic. No shoots driving up from the ground but rather earthworms making the ground. My mind was so set on my little magical thought that I couldn’t see the magic in the truth right in front of me. But my daughter’s rapture, centered on uncovering a new layer of simple dirt-eating mystery was infectious. Maybe we hold on to our little wonders because we’re afraid there isn’t enough wonder, isn’t enough beauty, to sustain us? But new wonders, worn smooth over thousands of years, are always arriving and displacing our fragile embrace of things. Time to get back to get inside the studio and get to back to work. But this is a good time to hesitate – listening to worms working.