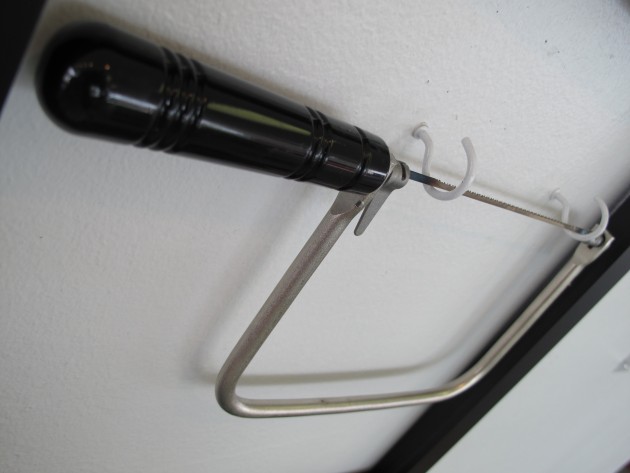 On May 8, 2014, the Tools exhibit took place at the Big Car Service Center. This piece is by Brian Ventresca.

Corners, to be precise, inside corners, are always a dilemma because they, in theory are always 90 degrees, but in reality never are.  Which for the most part never concerns anyone, but for a carpenter, it sometimes creates an unusual discussion.

Back in the early 80’s living in the Bay Area, in San Rafael, working for Lucas at his Skywalker Ranch, trimming out the Main House I found myself having a conversation with Steve Ferrini about the insecurity of the inside corner joint.  To which, the answer is to “cope the joint”.

(The first piece is cut 90 degrees and sets square against the adjacent wall.  The joining piece is first cut at 45 degrees, but then you cut out the material that is never seen, thus leaving the rim of the trim piece to overlay onto the first piece, giving the illusion of an almost perfect inside corner.)

This gives great adjustment to the joint.  Which also makes you look like a craftsman.

To which Ferrini explains, “a cope is when you cut a 45 and then you cut it out.”  Looking through the old craftsman eyes, you know he is right.

In order to bring the illusion to truth, someone, a carpenter of European descent (it is preferable to be kept a mystery), it would be presumed, would invent the tool.

It is almost obsolete these days for there are faster ways, with modern tools, to perform the task.  But still, without it, the modern forms would not exist.

Enter the struggle of the old ways (to build to last) against the new ways (to build for the moment).  Tools it seems are on the front line.  To use and discard instead of use and then sharpen (or clean) and then use again.  Maybe it’s just a small portion of what is happening in our world today.

For the coping saw produces a joint that can be stained and finished, which looks perfect.  Or today, cutting two pieces of trim (sometimes it’s a wood substitute) at 45 degrees and nailing them in.  Then caulking the open joint and applying the paint, making it look perfect as well.